Still doubtful about the whole cloud computing thing? Here’s a new metric that should probably change your mind. The combined market capitalization of the Top 30 cloud computing companies is now north of $100 billion.

If you wonder on a daily basis , as I do, as whats really happening at the workfront, it will give you some comfort reading this WSJ article on a middle manager in his 50s. as I have always argued in my blog, a new breed of management model is urgently required. Models which will go beyond Flat worlds, which will potentially shed light on decades of upcoming struggles. Models which Governments worldwide will use to create new programs to help their own citizens. Else we are doomed with rusted thinking which is prolonging agony across decades. Read on…

“I know I’ve peaked in my career,” Mr. Toal said at the time. “I am never going to be a vice president. But I’m running as fast as I can, and I don’t know why.” 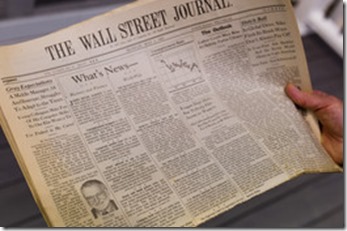 To other middle managers, I’d say: Be flexible and open to taking on new challenges because it makes you quick on your feet, gives you more understanding of how a company works.

One of the things I did learn is that it’s really hard to choose your own path. Things happen, and you go with it.”

To stay afloat, he has reinvented himself again and again. Once specializing in managing production, he learned marketing, then purchasing, then finance. He gets up at 5 every morning and doesn’t get home until 8 p.m. Yet he still does essentially the same job he did 10 years ago: overseeing a small staff, making revenue projections and supervising expenses in the sales division and resolving disputes over salary compensation.

Only this year did he get back to earning the salary he made in 1989.

When Mr. Toal’s father, a union machinist, was 54, he had already begun planning for retirement, was respected by his union and company management, and had become active in the local United Way. Mr. Toal recently stopped coaching his 16-year-old daughter’s soccer team because he has no time. He can’t imagine retiring because he has no pension—just money in a 401K plan and a series of worthless stock options. He pays $27,000 a year to send one daughter to Simmons College in Boston. His other daughter heads off to college in two years. His wife works part time as a teacher’s aide.

Eyes turn to Mr. Toal. “No clue,” he says. “I feel like I’ve peaked in my career, but I don’t think I’ve peaked as a human being.” He loosens his tie. “Things are not what any of us anticipated–that with natural talent, hard work and good moral values, there would come some sense of stability. There is no security and no stability.”

Its a cliche to say Cloud is disruptive. Its already mainstream as evidenced by the adoption across the spectrum. I came across this article which expounds on this theme. Below are some excerpts:

CEO and founder David Soutar said that almost all of the software they used had come out of the startup community, and that because they can relate to how the development process works, they are willing to accept a few bugs here and there. But it also means that the businesses creating these products understand that startups don’t have a lot of money to spend, and price themselves accordingly.

“The companies that come from startup roots understand that as a startup company, you don’t have a lot of money to spend.

In fact, Soutar sees the minimal features of Google Apps and similar cloud services as being a cost saving compared to “installable” applications.

And there are areas where enterprise systems haven’t yet caught up. For example, WattCost is using Flowdock to tie everything together on the social media and, to a degree, customer relationships management side. It’s a combination of an internal instant messaging system and an inbox that can be hooked into other services like Twitter, Facebook, Zendesk, and GitHub.

Just something we at Wisehoney are building; timing couldn’t have been more apt.

David Burkus’s latest article in HBR Blogs highlight the key challenge in Innovation. How to get Ideas out of peoples brains to something which is meaningful in the real world. Nope, its not the latest fad in management but a plain issue of how to recognize the right ideas and the people behind those ideas.

When most organizations try to increase their innovation efforts, they always seem to start from the same assumption: “we need more ideas.” They’ll start talking about the need to “think outside the box” or “blue sky” thinking in order to find a few ideas that can turn into viable new products or systems. However, in most organizations, innovation isn’t hampered by a lack of ideas, but rather a lack of noticing the good ideas already there.

It’s not an idea problem; it’s a recognition problem.

One possible solution to this “idea killing” problem is to change the structure ideas have to move through. Instead of using the traditional hierarchy to find and approve ideas, the approval process could be spread across the whole organization. That’s the approach Rhode Island-based Rite-Solutions has taken for almost a decade. Rite-Solutions has set up an “idea market” on their internal website where anyone can post an idea and list it as a “stock” on the market, called “Mutual Fun.” Every employee is also given $10,000 in virtual currency to “invest” in ideas. In addition to the investment, employees also volunteer to work on project ideas they support. If an idea gathers enough support, the project is approved and everyone who supported it is given a share of the profits from the project. In just a few years, the program has already produced huge gains for the company, from small incremental changes to products in whole new industries. In its first year alone, the Mutual Fun accounted for 50 percent of the company’s new business growth. More important than the immediate revenue, the idea market has created a culture where new ideas are recognized and developed throughout the entire company, a democratization of recognition.

In addition, it’s a system based on the assumption that everyone in the company already has great ideas and the market just makes them better at finding those ideas. It’s not an idea-solution; it’s a recognition-solution.

Earlier this year N.R. Narayana Murthy pointed out the need to position India as an ‘innovation’ destination, build products and add value by strengthening its existing areas and looking at new ones. This clarion call is resonating amongst others in the Indian industry at a time when winning deals and getting Fortune 500 companies to open up their technology budgets are getting harder.

Analysts and industry watchers are of the view that despite growth in the sector’s contribution to India’s GDP, from 1.2 per cent in fiscal 1998 to 7.5 per cent in the 2012 fiscal, the sector still missed out on opportunities to position India.

The two most often cited areas are software products and the ability to go beyond body shopping and cost arbitrage. “When I look at Indian IT services players, I can’t distinguish one from the other,” says a US-based outsourcing advisor who does not wish to be identified as he works with some Indian IT companies.

Some management thinkers are at the cutting edge of management thought and rightly lead the world with their thinking. Rosabeth Moss Kanter is one such thinker who never fails to amaze. Below is an excerpt from her recent article which is a good guide for all of us in the business world.

between winners and losers is how they handle losing.

That’s a key finding from my ongoing research on great companies and effective leaders: no one can completely avoid troubles and potential pitfalls are everywhere, so the real skill is the resilience to climb out of the hole and bounce back.

Volatile times bring disruptions, interruptions, and setbacks, even for the most successful among us. Companies at the top of the heap still have times when they are blindsided by a competing product and must play catch-up. Sports teams that win regularly are often behind during the game. Writers can face dozens of rejections before finding a publisher that puts them on the map. Some successful politicians get caught with their pants down (so to speak) and still go on to lead, although such self-inflicted wounds are harder to heal.

Resilience is the ability to recover from fumbles or outright mistakes and bounce back. But flexibility alone is not enough. You have to learn from your errors. Those with resilience build on the cornerstones of confidence — accountability (taking responsibility and showing remorse), collaboration (supporting others in reaching a common goal), and initiative (focusing on positive steps and improvements). As outlined in my book Confidence, these factors underpin the resilience of people, teams, and organizations that can stumble but resume winning.